I Tested HOKA’s Kawana Shoe At Their Community Workout Event. Here’s How It Went

For just over a year now, I’ve dedicated an hour every day to moving my body. Whether I walk, run, strength train, or all of the above, scheduling in this time has helped me focus on my health and since this shift, I’ve felt more energetic—both physically and mentally. Plus: It always helps to have an excuse to buy cute workout gear (if you look good, you feel good, right?). So I was excited to test out HOKA’s popular Kawana shoes to see how they supported my feet through my many workouts.

This California-based athletic footwear and apparel brand prides itself on its mission of empowering people to move—in any way that brings them joy. The shoes are designed with exactly that in mind; with enhanced cushioning and a meticulously-engineered midsole that makes every step feel supported. But the brand is also community-driven. They don’t want to tell shoe shoppers that their footwear is one-of-a-kind, they want shoppers to try on the shoes and immerse themselves in the HOKA world. This is what inspired the creation of their pop-up HOKA Assembly Hall on the corner of Queen Street West and Ossington Avenue in Toronto.

“We wanted our Canadian launch to feel big and that meant inviting people into our home,” says Chelsea Cardoso, the senior marketing manager at HOKA who led the launch. “This is why we wanted a space versus a retail store—it allows people to test out the shoe because feeling it is believing it.”

The brand officially launched in Canada in early 2020, but with closures in full swing, they were forced to pivot and scale down their introduction into the market. Two years later, they were finally able to bring their original idea to life through a four-part workout event hosted in their very own assembly hall.

I was invited to take part in the first community workout event of the series. I jumped out of bed that morning and picked out a fitness-pro-worthy combo of royal blue athletic leggings and a space grey sports bra. I brewed a cup of coffee to-go, hopped into my car and headed downtown.

By the time I got to the assembly hall, I was jittery with excitement (may have also been the caffeine). When I entered the colourful foyer, I exchanged my outdoor shoes for comfy slippers courtesy of HOKA. I was greeted by a large, vibrant mural of the Kawana shoe and a happy huddle of HOKA team members. The hall was modern and minimalistic with pops of bright blues and pinks. A wall of windows let natural light stream in and highlighted the juice and smoothie bar—I knew where I was heading for a post-workout treat. Yoga mats and step platforms lined the main workout area in the centre of the hall. Up front, there was a small stage where a DJ and band were setting up—something I had never seen before in a gym.

I spotted my name printed in bright bold letters on a row of vibrant cubbies across the hall and was delighted to find a big canvas tote bag inside. It was packed with a small refresh kit stocked with a rosewater spray and handy wipes, and, of course, a bright blue HOKA shoe box that housed a pair of their famous Kawanas.

I quickly flung off my slippers and slid into my new pair of bright and colourful runners. As I walked up and down the row of lockers, testing out the fit and feel of the shoes, one of the HOKA tech representatives approached me and asked how I liked them. “Feels like walking on a cloud,” I responded.

More and more people were making their way into the assembly hall, a mix of fitness or lifestyle influencers, professional trainers, gym owners and everything in between—I was proud to be a part of the “in-between” bunch. Once we were all laced up and ready to sweat, Cardoso introduced our trainer Niko Mullings along with one of HOKA’s tech and field experts Sean Hamilton, who briefly explained the design of the Kawana.

“This shoe is about moving you forward—whether that is in a fitness class, on the road, at the gym or day-to-day life,” says Hamilton. “That is the ethos of HOKA and this is our first shoe that bridges the gap between both indoor and outdoor workout settings.”

In reference to this bridged gap, these shoes are meant to target “fitness omnivores,” as HOKA playfully dubs them. These are people who like both outdoor long-distance running and working out in a gym or studio. As someone who’s always had a different pair of runners for indoors and out, I was intrigued by this concept (and have decided to respectfully ask my friends and family to only refer to me as a fitness omnivore from now on).

When the class began, the in-house band and DJ filled the space with upbeat music and Mullings immediately led our group of 10 in a strength and conditioning workout. Since I’ve been working out pretty consistently for over a year now, I wasn’t too concerned about keeping up with the group until I heard him say, “Great job squad, that was set one of four, we’re just getting started!” And I was already out of breath. Thankfully, Mullings’ upbeat energy helped me, and the rest of our group, push through, especially during our last set. 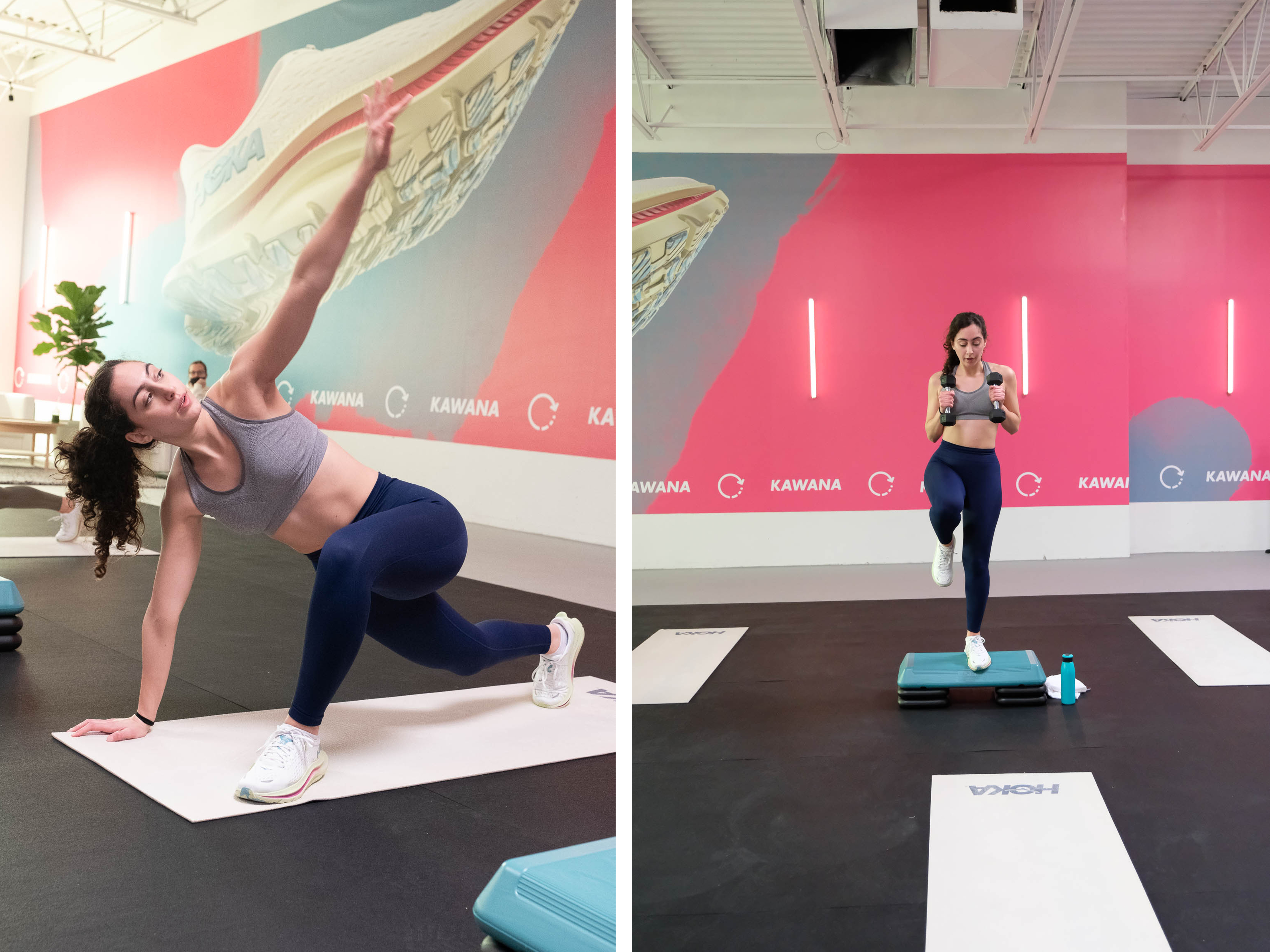 From bicycle crunches and plank mixes to split squats and curtsy lunges, it was a full-body workout that ended with a relaxing stretch session. The Kawana shoes provided a lot of support during the jumping movements and grip during faster sequences. As someone who used to play basketball, I’ve also rolled my ankle a few too many times, so I appreciate the tighter contour and support around the heel and ankle. The shoe is also designed with midsole foam which offers some rebound while running or jumping, along with a SwallowTail, which is their trademarked bevelled heel that creates a wider surface for smoother heel strikes.

After the workout, we headed to the juice bar to refuel and I treated myself to a tasty vanilla smoothie packed with vegan vanilla protein, oat milk, cacao nibs, coconut, dates and banana. Then I packed all of my HOKA goodies into my new tote bag and felt energized and ready to tackle the rest of my day.

“I love group fitness and missed it a lot during the pandemic, so to be back in this environment is really exciting,” says Cardoso. “There’s this buzzing energy in the air and our main hope and goal is for everyone to start off their Sunday in an amazing way and work up a good sweat.”

To learn more about HOKA and browse through their footwear and apparel, visit hoka.com.

The post I Tested HOKA’s Kawana Shoe At Their Community Workout Event. Here’s How It Went appeared first on FASHION Magazine.

In biggest failure so far, Shopee exits Indian market. What’s next for the e-commerce app?

In biggest failure so far, Shopee exits Indian market. What’s next for the e-commerce app?