The Iconic Isabel Marant Wedge Sneaker Is Back

The year is 2011. “Rolling In The Deep” is playing. You’re on your iPhone 4S, scrolling through this new app called Instagram. Suddenly, your thumb freezes on an image. It’s a paparazzi shot of Beyoncé, holding a tiny Blue Ivy in her arms. But that’s not what catches your eye: It’s Bey’s shoes, a black velour pair that looked like the lovechild of a sneaker and a wedge bootie, imbued with a quintessential French je ne sais quois. You’ve just had your first sighting of the Isabel Marant Bekett shoe, and it’s instant lust. Even if the closest you ever get to them is a knock-off pair from Steve Madden. (Beyoncé, which of course you know, would go on to wear them in her “Love On Top” video.)

Fast forward to 2021, and that cult shoe is back, a full decade after it reigned supreme as the It footwear of the early 2010s, arguably playing a fundamental role in the rise of athleisure. (A designer shoe that married fashion cachet with a walkable heel? Ground-breaking, literally.) To celebrate the tenth anniversary of the Bekett — renamed the Balskee, a made-up word as far as we can tell — Isabel Marant is re-releasing the shoe. It’s not quite the same shoe that the likes of Alessandra Ambrosio, Rihanna, Kate Bosworth, Gisele and Ashlee Simpson leaned to nail the coveted “model off duty” look that proliferated circa 2013.

This re-release is slightly tweaked, adding a bit more height to the heel, and launching in five new colour ways: Black, white, yellow, red and green, the latter surely to symbolize all the cash the brand made off them in their early 2010s’ heyday.

According to a release from the Parisian designer behind the shoes, she “never stopped wanting to wear them,” although, as she told Footwear News a while ago, she lost the will to wear them for a while after seeing too many “super-ugly” knocks offs out there. (Seriously: Even Skechers got in on the copycatting.) Still, her statement continues: “The most comfortable things are the things you will always wear and that you are never fed up with.” Especially when those things have sold over 200,000 pairs since their launch, and who happen to celebrate a milestone anniversary at a time when nostalgia dressing is everything, and a heeled bootie is as close as we want our feet to get to anything that’s not a lambskin slipper right now. 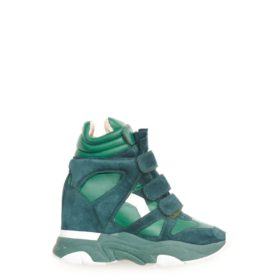 If you want in on this time warp, the re-released Isabel Marant Balskee can be yours for $770 USD in store and on their website.

The post The Iconic Isabel Marant Wedge Sneaker Is Back appeared first on FASHION Magazine.

Mauritius to open for International Travel from July 15